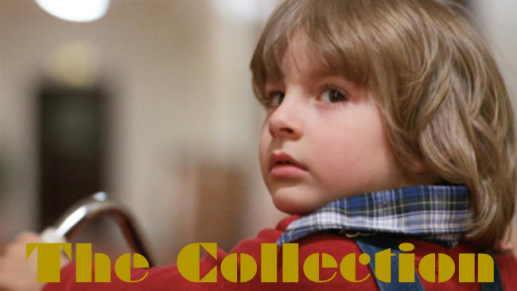 The Shining is a bona fide horror classic, and my favorite horror film of all-time. It is a terrifying tale that will definitely stick with you. The Shining is the newest member of the so-called Collection, and I therefore deem it a must-watch film.

The Shining follows Jack Torrance (played by Jack Nicholson) the newest caretaker of the Overlook Hotel. Jack and his family, including his son Danny (played by Danny Lloyd), are to stay alone at the Overlook Hotel, and Jack soon begins to suffer from what-we-presume is cabin fever, while Danny starts to show that he can ‘shine’, which grants him the ability to see apparitions. But is Jack just sick, or are the ghosts real?

Kubrick’s The Shining is infamous for being criticized by Stephen King. Now, I’ve never read the original novel, but while this film may be a poor adaptation, I am not of the belief that it is the director/writer’s duty to adapt novels faithfully. The Shining, as a film, has a completely separate life from the novel, and, though comparable, it shouldn’t be evaluated by comparison.

I might end up reviewing this film as a classic later, so I won’t go into a full review. But I urge you to watch this film as soon as possible. When I first saw it, when I was very young, I didn’t really pay attention – but when I revisited I became absolutely terrified of the Overlook Hotel. Check it out!

What do you think about The Shining? Sound off in the comments.