Look at the picture, what’s the first thing on your mind? My guess is you think, that I’ve said the Bears will win this year; this season. While I’d love that to happen, and I don’t think that’s inpossible, that’s not my prediction. But before I go any further, let me tell you how my predictions work: I start by writing down every game, every week. Then I go over each and every game, and pick a winner for the game in question. That leaves me with a record for every team, following that I predict the playoffs, as it would play out with my predictions in mind. That is how I give you my complete predictions for this NFL Season. Here we go. 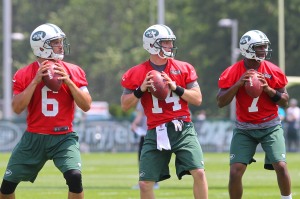 The most exciting QB ‘battles’ happen in the AFC East this season. Yes, the Brady-division – heck, why not? Let ’em have some fun for once. First and foremost, I have the Buffalo Bills finishing 6-10. The Bills have strengthened their team, and I’m a big fan of E.J. Manuel, but the fact that Jeff Tuel (an undrafted rookie) is starting week one, leaves me worried that they won’t get to 7-9. The battle between Manuel & Kolb was fun, but in the end it sucked. Manuel was clearly better than QB-Journeyman Kevin Kolb. Next up are two disaster teams, that I fear will be nothing more than simple notes, when we look back at this season, one year from now. The teams in question are the New York Jets & the Miami Dolphins, I have them both finishing 3-13… Brace yourselves, fans. The Jets are always fun to watch, not because they’re good, but I imagine lots of drinking games are built on their turnovers and losses. Mark Sanchez battled Geno Smith this pre-season, and it would probaby be smart to start Geno – seeing as Mark Sanchez, clearly, is not the future of the New York Jets. I fear for Rex Ryan, he will have to become a coordinator once again to regain credability. The Dolphins aren’t ‘that’ bad, but they’ve not really improved – and I don’t see them making anything exciting this season. Sorry ‘Phins. Finally, the Patriots look great as always – even with Tim Tebow on their proposed 53-man roster. Danny Amendola will become a great receiver for this team, and they will once again win this division with a record of 14-2.

This division is the exact copy of the NFC North, even more than just the ‘north’ part. Every team is so equal, talentwise, and have incredibly intense games and rivalries. I have the Bengals winning this division with a record of 11-5, they win by having the most complete offense in the division. They should be proud of that, seeing as they are in the division of the Super Bowl Champions, the Baltimore Ravens (A team that I called would be in the Super Bowl last year.). Speaking of the Ravens, I have Baltimore getting an AFC Wildcard spot by going 9-7 in a faulty AFC. They have lost a lot of strong players, and I fear they will play catch-up all season. The Pittsburgh Steelers had long been the leaders of this division, but they’ve lost a lot since then – they are no longer who we thought they were. I have them going 7-9. Finally, I have the Cleveland Browns, the ultimate catch-up’ers, going 5-11. Yes, they are improving – but I’m not confident in Chudzinski or Weeden. They have some spots to fill, before they can be good again.

Let’s not beat around the bush, Houston Texans are the best team in this division and will once again win. I see them going 13-3, with a strong team and a smart coach. This could be a great year if they learn to play in the playoffs. The other Wildcard team in the AFC are the Indianapolis Colts, I have Andy Luck stepping up once again – and getting them to a record of 10-6. The Anonymous team in this division is the Tennessee Titans, I don’t see them doing much – and I see them finishing 3-13. Sorry Jake Locker, not this year. Finally, the awful Jaguars, with new colours (la-di-da), will finish 1-15. Sad, but that’s how I see it. I liked how Blaine Gabbert did in the Pre-season against the Jets, but then again – that was the Jets… Sorry Shahid Khan (Khaaaaaaaan!).

Welker & Manning = Division winners. Wes Welker is not just created by the Patriots, and he will regain it all this year. This is truly an impressive team, expect to see them A LOT. I have them going 16-0, yes I said that – and get used to reading that. I like the Kansas City Chiefs, there I said it, but why shouldn’t I? Andy Reid + Alex Smith = A great situation. I have them going 8-8, and that could be better if the Broncos fail. The Chargers look really, really bad. They’ve not really improved a lot, sure D.J. Fluker looks good and Manti Te’o could be good. But we’ve only seen bad things from San Diego. I have them going 7-9. Rivers should be shopped around next year. Finally we have the Oakland Raiders. They are just awful, sure Pryor has potential, but they are a BAD team. I have them going 1-15. 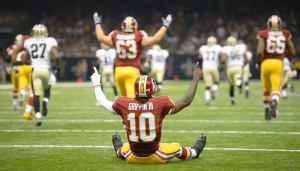 R.G. Three. That dude is just awesome, I’m a fan. I have his Redskins finishing 8-8, and that makes me sad – I desperately want them to win this division. But, in the end, the Giants are too good. Eli will give New York a new Playoff-adventure, by going 12-4. There are two 7-9 teams in this division, the Cowboys & the Eagles. Vick will dominate, but overall his team is not good enough – and the Cowboys are not yet ready for the 4-3 / Tampa 2 defense. I suggest calling Lovie Smith, just don’t make him a Head Coach.

The Bears are good with Marc Trestman, and I’m not worried about Marshall’s hip-problems, it will all be good – and Jay will succeed with Marshall, Forte & Jeffery. This season will be good, because of a new O-Line with Long & Mills on the right side, and Bushrod and Slauson on the left. Also, don’t forget about Jon Bostic, that dude is amazing. I have my Bears going 12-4. However, they are NOT winning the division, they are ‘just’ getting a Wildcard spot. The Packers still have the best QB in the NFL, and they will win this division… 15-1… Moving on, the Vikings look good – but too many young/inexperienced players starting. Peterson is not God, and they will only go 6-10. Finally, the Lions will end 2-14. No discipline, fire that coach. 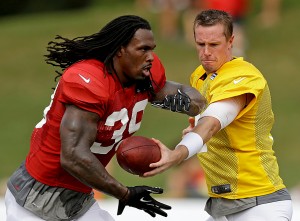 Steven Jackson + Matt Ryan + Julio Jones + Roddy White = Best Offense in the NFL. They will win this division, 13-3. The Saints will return as a good team, but nowhere near as strong as Atlanta. N.O. will finish 9-7. The Panthers aren’t ready, and Cam is not mature yet. They will finish 6-10. Finally the Bucs, will finish 3-13. Shop your QB around, build anew.

The Strongest Division in Football will once again see the San Francisco 49ers win, this time it’ll be with a record of 16-0. They are perfect. PERFECT. However, the Seahawks are good, and will get a wildcard, by going 10-6. The Rams are still a work in progress, and will finsh 7-9 – while the Arizona Cardinals will go 6-10. Not bad for a ‘rookie’ coach in AZ.

The Wildcard round will result in the Bengals beating the Colts, the Texans beating the Ravens. In the NFC The Giants will beat my Bears in New York, sadly… Sigh… And the Falcons will beat Russel Wilson and the Seahawks. In the Divisional round the Broncos will beat the Bengals, The Patriots will beat the Texans. In the NFC the 49ers will beat the Giants, and the Packers will beat the Falcons… Do you see where this is going? No you do not. The AFC Champion will be the Broncos, after a match between Brady and Manning (AWESOME). The NFC Champion will be the 49ers! The Packers will not be able to beat the most exciting QB in the game, and the best Coach in the game. Harbaugh & Kaepernick are on their way to the Super Bowl yet again. Only this time, I see them beating the Manning-led Broncos! Two 16-0 teams, one PERFECT team. The San Francisco 49ers. The Perfect NFL Season? I think so.