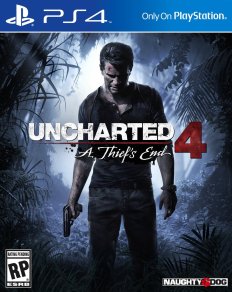 The following is a game review of Naughty Dog’s ‘Uncharted 4: A Thief’s End’, a PlayStation Exclusive.

One last time. One final adventure. Uncharted is one of the great video game console series, and with A Thief’s End we are seeing the conclusion to Nathan Drake’s story. Naughty Dog, the developer of the game, holds a special place in my heart for having made Crash Bandicoot, Jak and Daxter, and The Last of Us (my favorite game of all-time). But Uncharted might be the most popular franchise they’ve ever done.

I first encountered the Uncharted-franchise back in late 2007, when Drake’s Fortune was released. I really, really liked Drake’s Fortune, but when the sequel, Among Thieves, came out in 2009 I somehow missed it. I didn’t return to the video game series until late 2013 with the third game, Drake’s Deception.

In A Thief’s End, we see Nathan Drake (voiced by Nolan North), now married to Elena Fisher (voiced by Emily Rose), out of the treasure hunting business. Nathan is working for a salvage company now, but Elena senses that he might have a need for adventure. Filling out paperwork isn’t enough for Nathan Drake.

One day, Nathan’s long-lost brother Sam Drake (voiced by Troy Baker) comes back into his life. Sam’s life is on the line, and he needs Nathan to help him solve a mystery regarding pirate Captain Henry Avery for a man nicknamed ‘the butcher of Panama.’ Though he initially refuses, Nathan eventually agrees and lies to Elena about his whereabouts. Welcome to A Thief’s End.

I’d probably say that this is the most mature Uncharted game ever. Nathan makes human mistakes, and you become frustrated with him quite easily. Also, I really enjoyed how many times you actually see people discussing their problems in the game, and not just putting them off for the sake of moving forward to another action sequence.

But the action in A Thief’s End is as strong as it has ever been in the franchise. There’s a pretty cool clock tower-scene, a couple of exciting chases, and some interesting puzzles as well. The addition of the grappling hook was a pretty clever idea, as it works really well in thrilling combat sequences.

I also think this might be the best story yet. For me, at least, it was the most interesting story we’ve seen in the Uncharted-series. Sure, the tales of El Dorado, Shambhala, and the Iram of the Pillars were exciting, but the supernatural and magical elements didn’t work for me in every game.

What really helped this game’s story excel was how it handled heartwarming references, familiarity, and emotional character moments. It’s just a really special game, with a really appropriate theme for Nathan Drake’s final adventure. You have to know when to stop. Greed will kill you.

One thing that I’m pretty sure most fans were worried about was the unexpected introduction of a brother. Sure, there will probably be some who refuse to even care for Sam, but if you give the character time, then I think you’ll start to warm up to him. Sam is a good addition to the franchise, and Baker does a good job with the character.

Thankfully, the original characters are still given a lot of great moments. There are a couple of moments between Elena and Nathan that are really special, and Sully’s introduction is really cool. The outro to chapter 19 had one of my favorite moments in the game, and chapters 4, 11, and 16 are my favorite chapters in the game. Oh, and the epilogue is fantastic.

Now, even the best games have at least one or two issues. A Thief’s End isn’t perfect. There’s a sequence late in the game with Sam and Nathan on a boat, which was pretty slow and it hurt the pace of the game. Also, I’d say that Nadine, one of the antagonists, is a pretty unnecessary foe. With that having been said, though, I must admit that some of her scenes were really cool, and the action and story points in the third act were amazing.