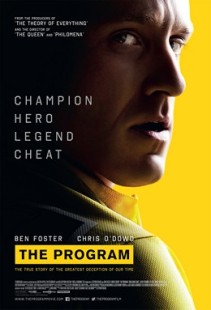 The following is a review of The Program, a Stephen Frears film.

I am a fan of the sport. I love watching the Tour de France every year. There are teams and riders that I support, and those that I strongly dislike. Lance Armstrong used to be in the first category for me, but has since become a symbol of what someone can do to hurt a sport. He made us question sports, sport federations, teams, and athletes. The story of Lance Armstrong deserves a great film.

Therefore I was happy to hear that the great Ben Foster would play him, and that Stephen Frears, the director of Philomena and High Fidelity, would direct the film. Somehow, however, I missed the film in theaters, and I had to wait for it to become available on video-on-demand in Denmark. The wait is over. I’ve seen The Program, and I while I didn’t really dislike the film, I have to admit that I am really disappointed with it.

The Program showcases the career of the legendary road racing cyclist Lance Armstrong (played by Ben Foster). After failing to get a desired result while being road racing World Champion, Lance Armstrong contacts Gewiss-Ballan team doctor Michele Ferrari (played by Guillaume Canet) with the hope of being supplied with the same performance enhancing drugs that Ferrari had used to make other teams win.

But when a journalist from The Sunday Times, David Walsh (played by Chris ODowd), realizes that something isn’t right about Armstrong’s sudden transformation, Armstrong must dodge doping allegations as he breaks records in the Tour de France.

Let’s talk about the two central characters – Armstrong and Walsh. I’m not quite sure what the filmmakers wanted to do with these characters. Sometimes it feels like the film was going to be about both Armstrong and Walsh, but David Walsh disappears too many times as the story skips from one year to the next. As a result, the film feels somewhat unfocused.

Now, this is such a shame because I actually really liked what both O’Dowd and Foster were doing. O’Dowd isn’t given a lot to work with, but Ben Foster absolutely grabs his character by the throat. In this film, Armstrong is driven by ambition, but rotten to the core, and I thought Ben Foster did a great job here.

Unfortunately, Foster’s hard work is the only real thing that keeps you invested in the story, as the plot is unfocused, cursory, and superficial. I desperately wanted this film to blow me away, but it ends up not coming remotely close to reaching its full potential as a sports biopic. It is what it is. The Program is an uninspired take on one of the greatest liars in the history of professional sports.