Not long ago we got the news that the casting process for young Han Solo was almost done. Rogue One‘s first trailer should be appearing sometime in the next month or so. So, I started to wonder about other possible Star Wars-anthology films that I wanted made. That lead me to today’s post, wherein I pitch two Star Wars stories for Disney to adapt.

I, obviously, won’t pitch a movie about a young Han Solo, the stealing of the Death Star-plans, Obi-Wan on Tatooine, or a movie about Boba Fett as two of these are being made, and the last two have been rumored since we first heard of Star Wars anthology films. But everything else is up for grabs, as far as I’m concerned. So, allow me to geek out as I mention two things I’d love to see come out of the anthology films:

Pitch #1 – The Tragedy of Darth Plagueis the Wise 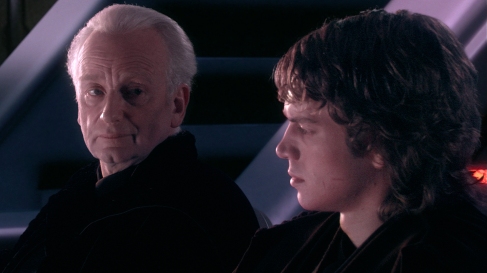 This is at the very top of my list. The story of Darth Plaguies has to be covered in the new canon, and preferably in a film. In Revenge of the Sith, Palpatine tells Anakin about Plaguies – and teases him with the power to save the lives of people you love. It is one of my favorite moments in the entire prequel trilogy.

I would really love to see a film focusing on Plaguies’s teachings, and Sidious’s envy, greed, and growth as a Sith. Now, there is a book about Darth Plaguies out there, but that is no longer canon. Therefore Disney could tell the exact story they want. I actually think Plagueis’s species isn’t canon any longer, so they could just make him human.

I think Fiennes is perfect for the role. He’s been the Red Dragon and Voldemort, and I think he’d be a pretty cool Plagueis. Now, David Tennant wouldn’t have come up if I hadn’t seen Marvel’s Jessica Jones. Tennant is absolutely creepy in that series, and I’d love to see his energy in the part of a younger Palpatine.

PROPOSED DIRECTOR: Matt Reeves – Reeves is a very talented director who really showcased his talents in Dawn of the Planet of the Apes. I would love to see Reeves take hand of a much darker Star Wars-film like this one.

Everyone who has ever heard of Revan knows that his story may be a story worth telling. I don’t believe any of Revan’s story is canon anymore, so I won’t act like it is – but while I’ll take some liberties with the story, I’ll try to grab one or two story threads from the old canon. Now, I envision it as a trilogy, but I’m sure they could tell his story in a different way. But if I were to envision a trilogy, then this is how I would lay it out (and yes, I made those titles up. I love them, though):
– The Rise of the Jedi Crusaders
– The Darkness Within
– The Greed of the Sith

The Rise of the Jedi Crusaders would see him as a Jedi Knight growing tired of the Jedi Council, and going against its wishes during the Mandalorian Wars. He assembles a group of Jedi, including Alek (later known as Darth Malak), and the film would show us their ideology, their mission, and the start of their involvement in the Mandalorian Wars. The film would see Revan and Alek going into an ancient Sith temple, and Revan deciding to usie the knowledge of the temple to help the Crusaders. It would end with Revan battling Mandalore, and putting on the helmet after defeating him.

The Darkness Within would see Alek and Revan go into exile after the Jedi Council disapproves of some of their actions. Alek and Revan would continue to look into the dark side of the Force, and eventually be called Darth Malak and Darth Revan by an old Sith Lord. The film would end with Malak and Revan killing their Sith Master, and becoming the leaders of the Sith.

The Greed of the Sith would see Malak grow tired of Revan’s soft attitude as a Sith. Malak and Revan, right after leading some successful attacks on the Galactic Republic, would fight. Malak would defeat Revan, with the help of some of Malak’s personal followers. Revan would be left to die in the battlefield, only to be found by a Jedi exile who would bring him back to the Jedi Council. After weeks of treatment, both physically and mentally, Revan would renounce his Sith teachings, and choose to fight with the Republic. Eventually, Revan would take down Malak and end the Jedi Civil War as a reborn Jedi on the light side of the Force.

PROPOSED DIRECTOR: Denis Villeneuve – Obviously a trilogy could have multiple directors, but let me just name one for now. Villeneuve is one of my favorite directors out there, because he isn’t afraid to take a challenge. He is directing the Blade Runner-sequel, and has directed films like Enemy, Sicario, and Prisoners.

What is your dream Star Wars anthology film? Sound off in the comments.