The following article features story spoilers for the entirety of both The Last of Us and The Last of Us: Part II. Do not read the article before you finish both games.

In 2013, Naughty Dog’s The Last of Us — my favorite video game ever made —  was released exclusively on PlayStation 3 (it was later remastered on PlayStation 4) to near-universal praise and numerous accolades. On the surface-level, this was a survival horror game in the zombie sub-genre. But it was also so much more than that. It was a story about love and rediscovering something to fight for. Gamers primarily played as Joel Miller (Troy Baker), a smuggler without scruples, who was tasked with transporting a young girl, Ellie (Ashley Johnson), across the United States for the purpose of crafting a vaccine to the fungal virus that had turned infected humans into ruthless barely-human creatures without rational thought. END_OF_DOCUMENT_TOKEN_TO_BE_REPLACED

HBO and PlayStation recently announced that Chernobyl-creator Craig Mazin will develop a series adaptation of the hit PlayStation game THE LAST OF US with Neil Druckmann, who was the writer and co-creative director on the original game. Druckmann is also one of the chief creatives working on the game’s highly anticipated sequel, THE LAST OF US: PART II. As I’ve definitely written before, THE LAST OF US is my favorite game ever made. It is a masterpiece. So, today, I want to give my updated opinions about who should play the game’s main characters in the upcoming HBO adaptation. END_OF_DOCUMENT_TOKEN_TO_BE_REPLACED

Bad news, true believers, Spider-Man may be out of the Marvel Cinematic Universe. First reported by DEADLINE, it appears that, in trying to negotiate the terms of a deal to extend Sony and Disney/Marvel Studios’ partnership in producing films starring Marvel’s web-slinger, Sony has refused to return to the negotiating table. Sony owns the film rights to the character, but, since February of 2015, Sony and Marvel Studios have had a partnership that led to Spider-Man’s appearance in Captain America: Civil War, Avengers: Infinity War, and Avengers: Endgame, as well as the creative direction — guided by Marvel Studios president Kevin Feige — for the Sony solo-films Spider-Man: Homecoming and Spider-Man: Far From Home which were both co-produced by Marvel Studios and featured Disney-owned characters such as Iron Man and Captain America. END_OF_DOCUMENT_TOKEN_TO_BE_REPLACED

In July, Sony and Disney duke it out for the box office bucks. Though there are a lot of really interesting films that I’m looking forward to this month, I’m focusing on two blockbusters in this edition of Box Office Predictions. Can a live-action remake dominate the month that also gives audiences the follow-up to Avengers: Endgame, or will another superhero movie define a month of the year? END_OF_DOCUMENT_TOKEN_TO_BE_REPLACED

The following is a short review of God of War: Raising Kratos — Directed by Brandon Akiaten.

Brandon Akiaten’s God of War: Raising Kratos is a documentary about the making of the 2018 version of God of War, which is arguably one of the best games of the decade. Dubbed a masterpiece by plenty of video game critics and netting a 94 Metacritic-score, God of War was a critical hit and, later, a fan-favorite. It won new fans and it pleased old ones, and it made the developing studio into a reinvigorated and much more cherished studio than it had ever been before. But the journey to get there was arduous as revealed by Akiaten’s feature-length documentary, which has been released on YouTube by Sony PlayStation. END_OF_DOCUMENT_TOKEN_TO_BE_REPLACED

The following is a review of VENOM — Directed by Ruben Fleischer.

Last year, director Daniel Espinosa’s sci-fi film LIFE was released to mixed-to-positive reviews. I liked that film much more than I thought I would, and I was impressed with how such an under-the-radar sci-fi film somehow had a cast with A-list stars in it. Back when we were still only waiting for LIFE to be released, a fun fan theory surfaced online: what if LIFE was actually a prequel to the then-upcoming Sony Spider-Man spin-off film known as Venom? END_OF_DOCUMENT_TOKEN_TO_BE_REPLACED

END_OF_DOCUMENT_TOKEN_TO_BE_REPLACED

It has been a lot of fun being a big fan of Marvel’s favorite wall-crawler since Marvel Studios and Sony agreed to ‘bring Marvel into the amazing world of Spider-Man’ back in February 2015. Since then we’ve seen this new version of Peter Parker appear in Captain America: Civil War where he stole Steve Rogers’ shield for a minute, and that was probably one of the best on-screen moments ever for the character.

But they say that all good things come to an end, and during these last few days Spider-Man’s future involvement in the Marvel Cinematic Universe has been called into question. END_OF_DOCUMENT_TOKEN_TO_BE_REPLACED

END_OF_DOCUMENT_TOKEN_TO_BE_REPLACED 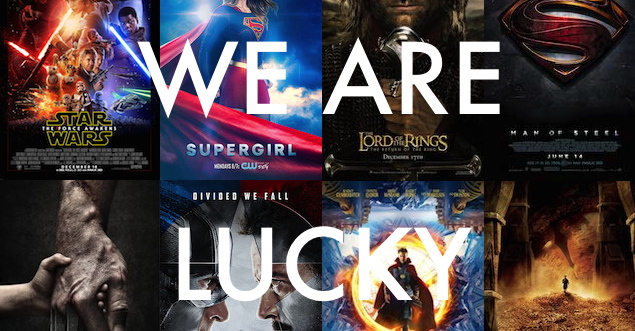 We live in the greatest time to ever be a fan of something. There are new comic books coming out every week, comic book movies are getting Oscar nominations every other year, people stand in line every month to watch the next big spectacle, and, most of the time, these spectacles are about the characters we love. END_OF_DOCUMENT_TOKEN_TO_BE_REPLACED