Series Created by Jon Favreau — All Episodes Are On Disney+ Right Now.

Jon Favreau’s The Book of Boba Fett is a spin-off of the extremely popular Disney+ Star Wars live-action series The Mandalorian. The Book of Boba Fett follows the titular character (played by Temura Morrison), who became a fan-favorite character in the Original Trilogy (and who made his in-universe return in The Mandalorian), as he tries to become the new daimyo of Tatooine for the purpose of controlling the territory that once belonged to Jabba the Hutt. But he isn’t the only one who wants to control what can and can’t happen on the desert planet.

END_OF_DOCUMENT_TOKEN_TO_BE_REPLACED

It’s always nice to see, when something you’ve loved for years is adapted successfully. Over five years ago, I read the first forty issues, or so, of Robert Kirkman’s Invincible, a superhero comic book series from Image Comics. I loved the comic book series back then, I still do, and I was excited when it was announced to be adapted as both an animated series and a film. That interest reached a fever pitch when the voice cast was announced. Steven Yeun (voicing Mark Grayson, Invincible), J. K. Simmons (voicing Nolan Grayson, Omni-Man), Sandra Oh (voicing Debbie Grayson), and Gillian Jacobs (voicing Atom Eve) voice the most pivotal characters, but it doesn’t stop there. Other great actors such as Seth Rogen, Mahershala Ali, and Walton Goggins all play important characters. Once you actually watch the show, you’ll see exactly why the cast is so star-studded. Because Invincible could be the ‘next big thing.’

END_OF_DOCUMENT_TOKEN_TO_BE_REPLACED

Had it not been for the fact that I think there is a notable jump in quality from the first to the second season of the Disney+ Original series, it would’ve been really difficult for me to separate the two first seasons of the first-ever Star Wars live-action series. You see, while, for Americans, there was an entire year in between the two seasons, Disney+ didn’t arrive in Denmark until September of 2020, and Disney made the decision to release the first season week-by-week. They did this so that when it ended, the second season would be ready to begin, but they also did it in an attempt to keep people on the streaming service for as long as possible. END_OF_DOCUMENT_TOKEN_TO_BE_REPLACED

The following is a review of Star Wars: Episode IX – The Rise of Skywalker — Directed by J. J. Abrams.

Although the subtitle of this film suggests otherwise, Disney has been pretty adamant in saying that the Skywalker saga (i.e. the episodes) is coming to an end with this ninth episode, which thus ends Disney’s sequel trilogy. It has been a trilogy that has been bumpier than I expected it to be, which is largely due to Lucasfilm hirings and firings, as well as the return of a rabid, entitled, and toxic part of the Star Wars fandom, which has been determined to have their say on what can and cannot be appreciated about these films. This part of fandom has been absolutely infuriating, and it has robbed Star Wars fans of the happiness that one should get when you discuss something that you love. J. J. Abrams’ The Force Awakens was an undeniably satisfying and very rewatchable table-setter, and Rian Johnson’s The Last Jedi was an ambitious, bold, and critically acclaimed exploration of legacy, legends, and failure. Now we have The Rise of Skywalker, J. J. Abrams’ curtain-closer. Though I did ultimately enjoy the film, I have to admit and acknowledge that this is definitely the sequel trilogy’s low-point, in part due to Abrams’ obvious attempt to appease parts of the fandom that could only be pacified by reversing decisions that were made in Rian Johnson’s film. END_OF_DOCUMENT_TOKEN_TO_BE_REPLACED

The following is a review of The Director and the Jedi — Directed by Anthony Wonke.

You can’t talk about Star Wars right now. I mean, sure, you have the ability to talk about the franchise, but the vocal minority of the Star Wars fandom has become rather toxic. As someone once put it, no one hates Star Wars more than Star Wars fans. As a big Star Wars fan, I had always disagreed with that notion, but the first fan reaction that made me realize the truth in that phrase was the reaction to Rian Johnson’s Star Wars: The Last Jedi. END_OF_DOCUMENT_TOKEN_TO_BE_REPLACED

This is it. The second half of the 5th annual I’m Jeffrey Rex Awards is ready, and this is the big half, to me. The awards that I’ll go through today are focused on film and documentaries, and I specifically wanted to get these out of the way before the Oscars were held. However, as I am a Dane, there are some films that have been deemed ineligible for these awards due to the fact that they (films like Lady Bird and The Post) will not be released in Denmark until April. Keep that in mind. Without further ado, let’s get to it.
END_OF_DOCUMENT_TOKEN_TO_BE_REPLACED

The following is my review of Star Wars: The Last Jedi — Directed by Rian Johnson.

There is nothing like Star Wars. The Star Wars saga includes the biggest films of all-time, the most influential films of all-time, and one of the most rabid and passionate fandoms in popular culture. There is an innumerable amount of lore about the galaxy far, far away, and the philosophy of Jediism was once recorded as a religion. Star Wars, as author Chris Taylor wrote, conquered the universe, and its influences can be felt throughout popular culture.  END_OF_DOCUMENT_TOKEN_TO_BE_REPLACED

Unless you’ve been under a rock for the last ten hours or so, you should know that tickets for Star Wars: The Last Jedi are now available. We also got a new poster last night, and a full trailer during the halftime of the Monday Night Football game between the Minnesota Vikings and my Chicago Bears.
END_OF_DOCUMENT_TOKEN_TO_BE_REPLACED

Breathe. Just breathe. — The first trailer for the next chapter in the Skywalker Saga is here, and it is a pretty amazing teaser trailer that, thankfully, doesn’t reveal too much about the plot while still feeding us plenty of exciting moments, shots, character returns, and general character arc hints. Let’s have a look at what’s been shown to us here. END_OF_DOCUMENT_TOKEN_TO_BE_REPLACED 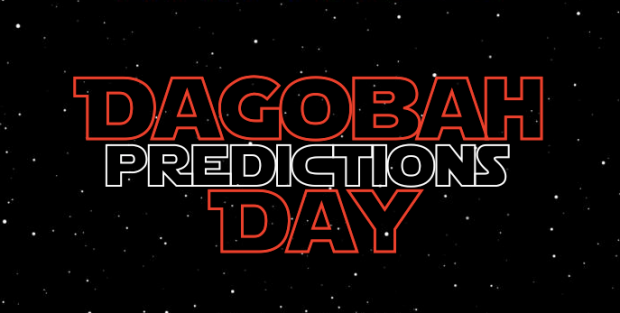 Over the next couple of days, Star Wars is being celebrated. Star Wars Celebration is happening in Orlando, Florida, and we are probably going to get the first trailer for The Last Jedi as well as some big announcements for the future of the franchise. Today’s Dagobah Day post is about trying to predict the answers to some questions I have about Star Wars Celebration.
END_OF_DOCUMENT_TOKEN_TO_BE_REPLACED