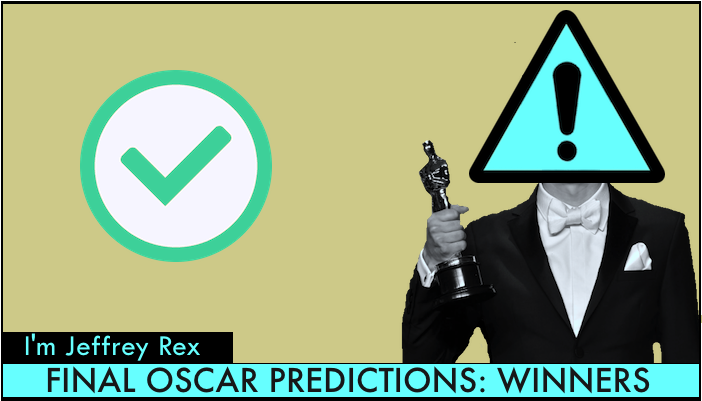 This is it. Here we are. This Sunday, the 90th Academy Awards will be held. They’ll laugh about the La La Land–Moonlight mess, maybe they’ll even invite the presenters and the producers of both films onto the stage for some kind of joke. Streaks will be broken, there will be bad decisions, good decisions, and decisions that will look idiotic years from now. That’s the Oscars. That’s all a part of the game. Being that it is this close, it is finally time for me to reveal my final Oscar predictions for this awards season. Who will win? Who will lose? What would I have voted for? Let’s dive right in with the first categories.

As you may have noticed, I only listed my prediction. I can’t really speak to these shorts this year as I haven’t seen any of them. I haven’t had the chance to. The opportunity.

Again, I’ve only got a prediction based on other accounts of the short films. I will have larger discussions or comments about the other categories.

The final short film category. Next up, I’ve finally got something to talk about.

I love The Square, and, really, a lot of people do. It swept the European Film Awards, which was quite an extraordinary feat, in my opinion, and for that reason it may actually be the most watched of these foreign language films. However, I, ultimately, have this feeling that A Fantastic Woman will take the win ahead of the aforementioned European darling. Why? Well, let me tell you, it was announced that Daniele Vega — the star of A Fantastic Woman — will actually be a presenter at the Oscars. It may not mean anything, but it sure seems like it means something, right?

While I, ultimately, think that Icarus and Last Men in Aleppo would be more political and timely picks, I think this award will go to the film that is made by and features a film legend like Agnès Varda.

This just seems so obvious. Maybe there is a chance that Loving Vincent or The Breadwinner does something here, but it isn’t likely.

I know, I know. War for the Planet of the Apes deserves this one, but here’s the thing – neither Rise nor Dawn won these awards, so I just don’t think it’ll get the award this time either. Blade Runner 2049 would make me happy too (and so would The Last Jedi).

The thing about these two sound awards this year is that the nominated films for each category are identical, and since I’m not sure most people know the difference between mixing and editing off the top of their heads, I’m betting that the awards will go to the same film.

The thing about these two sound awards this year is that the nominated films for each category are identical, and since I’m not sure most people know the difference between mixing and editing off the top of their heads, I’m betting that the award will go to the same film.

Okay, so I should say that The Greatest Showman is probably the smart pick at this point, but I just can’t bring myself to predict it. I really didn’t like the movie, even though some of the songs are fine. I really wish that “Visions of Gideon,” from Call Me By Your Name was nominated, but I still really like “Mystery of Love.” I’ll be happy if Coco wins here, though. Don’t make The Greatest Showman an Oscar-winning film.

I think this is a really strong year for film scores, and Blade Runner 2049 definitely should’ve been nominated here. But I don’t think any film will be able to overtake The Shape of Water here.

I genuinely think that this should be an easy win for Blade Runner 2049, but for whatever reason it doesn’t seem like that will happen. Not a bad winner, though.

Of course, Darkest Hour wins here. It transformed Gary Oldman and made him look convincingly like Churchill.

I hope that Dunkirk gets this one, because I really think the film does a good job of connecting the three narratives across time quite well. I think it’s an impressive achievement. I’ve read a couple of ‘anonymous Oscar-ballot’ articles that seem to say that they are impressed with I, Tonya‘s editing, so that may shock here, but I ultimately think that Baby Driver is the runner-up to Dunkirk here.

These last few days, what looked like a clear-cut Oscar win for the gorgeous Phantom Thread has gotten a little bit more competitive. Suddenly, The Shape of Water is one of the top contenders here. But I’m betting on Phantom Thread here. It makes more sense to me.

If Deakins doesn’t win this year, we riot!

If Billboards really is the clear frontrunner — and the likely winner of Best Picture — then it will probably take this one. But I don’t think its frontrunner status is as clear as some people think it is. I think the team behind Get Out has managed to make it be the most talked about movie of 2017, and I think it is very popular with most people (more on this in the final category).

All the stats point to Call Me By Your Name taking this one, and it probably will.

This has to be Rockwell, if the stats are to be believed, but I also think there is a chance that Dafoe gets a surprise win simply because Harrelson is also nominated here. Harrelson and Rockwell could knock each other out.

Again, the stats point to a Janney win, but there is a lot of love for Lady Bird and this could be the one way to recognize it.

This is Oldman’s and Chalamet is probably the runner-up. I don’t see Oldman losing this. This seems like a lock.

Hawkins could be the upset here, if The Shape of Water takes everything it is up for, but, realistically, McDormand takes the little gold man and adds it to her collection.

I think Nolan really deserves this one – Dunkirk is a real triumphant achievement, in my opinion – but Del Toro has won this awards season by being the affable auteur that we all love and appreciate. This is Del Toro’s award.

Okay, so I actually tipped my hand on Twitter earlier this week.

Get Out is winning Best Picture on March 4th.

You may be right. I may be crazy. But it just may be a lunatic you're looking for. #Oscars #PreferentialBallot

Let me be clear, Get Out isn’t the clear favorite to win the award. It isn’t the frontrunner. The smart money would be on Three Billboards or The Shape of Water, but I just really think that Get Out could surprise and do exactly the same thing that Spotlight did a few years ago (winning Best Picture and a screenplay award only).

Films like Dunkirk, Get Out, and Lady Bird theoretically have a chance as they are all very popular films. And, really, the reason why I’m not predicting The Shape of Water here is that the Best Picture category is decided by using the preferential balloting system that Vanity Fair explained quite well in a recent video.