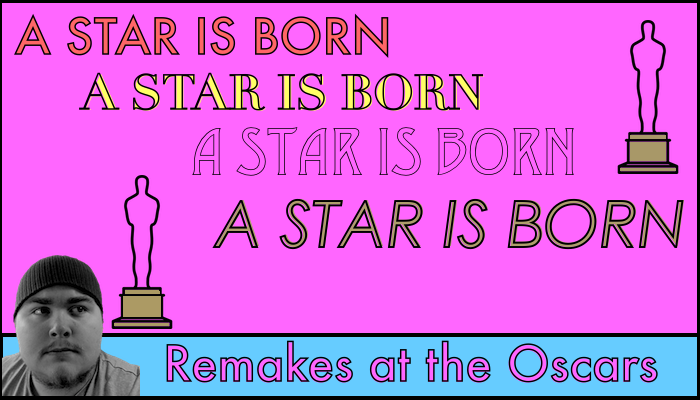 This year, Bradley Cooper is giving us his highly anticipated directorial debut with his version of A Star is Born. Notice how I said ‘his version?’ Good, well, the fact of the matter is that Cooper’s A Star is Born is the third remake released of the 1937 William Wellman romance drama. So, what does that mean for its Oscar chances? Can a remake be nominated for, or even win, the biggest categories at the Oscars? Well, let’s see.

In theory, a remake of another film shouldn’t be much different than an adaptation of a play or a novel, but, in recent years, reboots and remakes are film-terms that have become associated with poor attempts to remake classic films, but that isn’t really fair.

There are great remakes and reboots, and you may be surprised to learn which Oscar-nominated films were actually remakes. So, today, I want to talk about a few of them, as well as to figure out where A Star is Born‘s role is in all of this.

Let’s start with the last Academy Awards, whereat a popular remake was nominated for two Oscars — 2017’s Beauty and the Beast, which was nominated for Best Production Design and Best Costume Design. Now, at this point, you may shout at the top of your lungs that Beauty and the Beast didn’t win either of those awards or that it was never getting that same level of critical acclaim as A Star is Born is getting. You’d be right, but let’s now go deeper.

I think that those of you that aren’t plugged-in cinephiles will be surprised to learn that Martin Scorsese’s Best Picture-winning The Departed is actually a remake. In spite of its status as a remake, Scorsese’s film won four Academy Awards, including both Best Picture and Best Director. Now, there are two important notes to make here. The Departed is not a remake of an American film, but rather a remake of a Hong Kong film (Infernal Affairs).

You may object that a remake of a foreign film has a better chance at the Oscars than a remake of a widely-seen American product. You may be right. Others may say that Scorsese’s film is an exception due to the fact that its winnings are sometimes regarded as celebrations of Scorsese’s entire career — people often say that its Best Picture and Best Director wins were more lifetime achievements than anything else. Again, that is an argument that you can make. But, whether you agree with the decision or not, the fact remains that this was a Best Picture-winning remake.

But perhaps there is another better example of this all the way back in the 1950s — William Wyler’s Ben-Hur, which was nominated for 12 Academy Awards (winning a record 11-little golden men statues). Wyler’s film was a remake of the 1925 silent epic Ben-Hur: A Tale of the Christ. Of course, you may object, Timur Bekmambetov’s 2016 remake of Ben-Hur wasn’t nominated for any Oscars, but, you have to understand, that it mostly got negative or scolding reviews — it never had a chance.

This is yet another example that should hopefully calm those of you that were worried about A Star is Born‘s status as a remake. If you need more convincing that it will still be a major player, then listen here. Let’s just briefly take a look at how the previous versions of A Star is Born did at the Academy Awards. At the 10th Academy Awards, Wellman’s original version was nominated for seven awards (winning only Best Writing – Original Story. Do note that it also received an honorary Oscar).

At the 27th Academy Awards, George Cukor’s 1954-version with Judy Garland received a total of six nominations, but it did not win any of them. In spite of the fact that Frank Pierson’s version of A Star is Born got mixed reviews, the film did manage to win an Oscar in one (Best Original Song) of the four categories that it was nominated for.

What does all of this tell us? Well, in short, remakes can, and do, win Oscars — even the two other remakes of A Star is Born were relevant at the respective Oscar ceremonies that they were eligible for. So, theoretically, the fact that Cooper’s remake is the fourth film of its kind should not stop it from being recognized at the upcoming Oscars ceremony next February. Do I think it’ll win any awards? Well, I haven’t seen the film yet, but, for right now, I’d say its potential is remarkably high — and I think it’ll end up as the version of A Star is Born that did the best at the prestigious awards ceremony.