Phase One of the Marvel Cinematic Universe consisted of six films: starting with Jon Favreau’s Iron Man, and ending with Joss Whedon’s The Avengers. Phase One grossed $3,811,989,406 at the box office, and was nominated for four Academy Awards. Meanwhile, the Academy of Science Fiction, Fantasy and Horror Films (Saturn Awards) nominated the Phase One films for a total of 30 Saturn Awards (winning 8).

It is difficult to get popular catchphrases right – even more so to tweak these catchphrases and put a new spin on them. But that’s exactly what we got from Marvel’s The Avengers. Mark Ruffalo was the third Bruce Banner in 9 years (superseding Eric Bana and Edward Norton), and they simply had to get him right this time around. And they did. Mark Ruffalo just worked perfectly as Bruce Banner.

“HULK SMASH!” and “You won’t like me when I’m angry” are extremely important catchphrases to get right, but somehow this Joss Whedon script made something even better. “That’s my secret, Captain: I’m always angry” is a perfect line of dialogue. 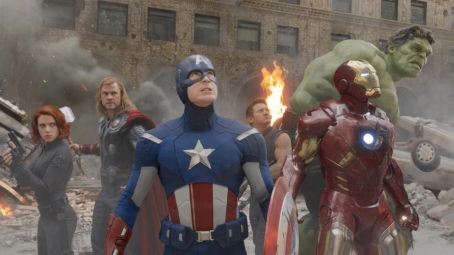 The one character that Marvel had to get right in the visual effects department was Hulk, and I think that’s the example I’ll use here. Hulk has simply never looked better than he did in this film. Back in Ang Lee’s Hulk the visual effects were less-than-stellar, and in The Incredible Hulk didn’t have the best look either.

The improvement in the look of the Hulk is noteworthy, but it is not the only thing we have to commend Janek Sirrs et. al. for. Everything works and considering the fact that this is probably the most visual effects-dependent film of Marvel’s Phase One that is quite spectacular.

Thor has a special look to it, and it was, to be frank, the first Marvel film to add a unique look to the universe. The costumes capture the vibe of what Asgard should be, and Thor’s costume is probably the one that has been changed the least.

Cobie Smulders as Agent Maria Hill. Had you said that to a Marvel fanboy in the first years of How I Met Your Mother, then I’m not sure they would have believed you. But Smulders works, and she may be the key to one day retire Sam Jackson’s Nick Fury for real.

Tom Hiddleston was so good that he made other Marvel villains look atrocious to some. Loki is a special character, and Tom Hiddleston absolutely embodies him. He simply owns every scene he is in. And he steals the movie away from Chris Hemsworth and Anthony Hopkins.

I could have gone with the easy answer here – Scarlett Johansson. However, Agent Peggy Carter was so good in First Avenger that she got her own show. Hayley Atwell has become the actress that links Phase Two to Phase One, just like the character of Agent Coulson linked everything together in Phase One.

Since appearing in First Avenger, Atwell has appeared in Winter Soldier and Ant-Man. And she is, without a doubt, the best love interest for any of the Marvel heroes.

Robert Downey Jr. is one of the most expensive actors in Hollywood. But that didn’t happen over night. He was in a bad place, and after Zodiac he needed his own film. He needed to be a respected actor again. Someone you could trust.

Iron Man was that film. Downey is the most experienced hero in the MCU, and he is the one guy everyone is desperate to sign to a film. Iron Man remade Downey, and Downey gave us a proper Tony Stark.

Marvel were smart when they hired Joss Whedon. He has a built-in fanbase, he’s got experience with comic books – and he knew these characters. He had a plan, and when Whedon and Feige decided to work together, then everything just made sense in the Marvel Cinematic Universe. This was Marvel’s big event film, the one film that made everyone trust the idea of a cinematic universe.

Iron Man was the film that started it all. The first post-credits scene, the first Avengers reference. The first stellar film. Almost everything worked in this film. And while Marvel villains have been criticized for a while, Stane was a strong villain. He made sense.

It was Robert Downey Jr.’s redemption film, and he hasn’t looked back since. Downey has become this character, and I honestly think no one else could play him right now.