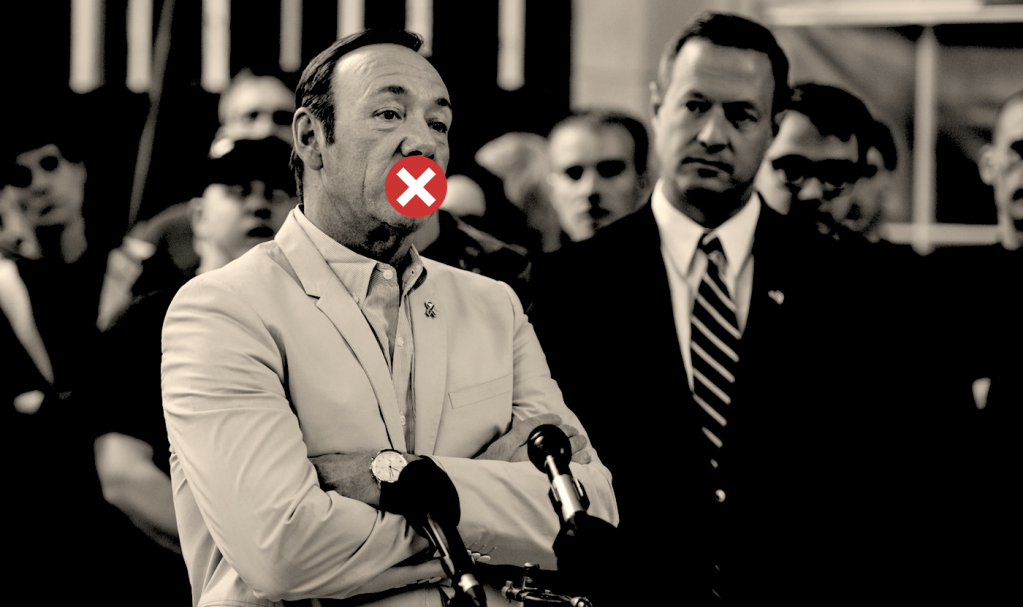 It really sucks when people whose work you admire turn out to be as awful as the people they portray in film and television. I didn’t write an article on Harvey Weinstein or any of the other men in the film industry, who have now, effectively, been expelled in the wake of their respective scandals. But the fact of the matter is that there is blood in the water, and male celebrities in the media spotlight are, seemingly, being held accountable for these awful actions.

Whether Kevin Spacey will fall upward or not remains to be seen, but seeing organizations, the media, and the general public react to what has just happened is going to give us an idea of how, as I put it, the mighty fall — because Kevin Spacey is a beloved and celebrated actor, who has now been revealed to have allegedly done something quite awful.

Excuse me for burying the lede, but let’s now talk about what Spacey has allegedly done. Theater and screen actor Anthony Rapp, who is currently starring in Star Trek: Discovery, has recently claimed that when he was just fourteen years old, Kevin Spacey — who was twenty-six years old at the time — picked the child actor up, ‘placed him on his bed, and climbed on top of him.’

Just typing that allegation into this article makes me feel sick. If this allegation is to be believed, then Kevin Spacey has done something that is probably going to haunt him for the rest of his career — assuming he is held accountable for his actions. It is, of course, also important to remember the victim. This has haunted Anthony Rapp for his entire adult life.

This allegation tarnishes Spacey’s filmography, but, perhaps, the film most affected by the allegation will be Sam Mendes’ American Beauty, in which Lester Burnham, Kevin Spacey’s character, lusts after his teenage daughter’s friend. Spacey, of course, went on to win his second Oscar for this performance.

It is just one of the performances that have now been tarnished by alleged actions of a man who has received much praise for his work from critics all over the world. I have been a big fan of Kevin Spacey, but these allegations effectively ruin all his work, they ruin his character, and they ruin any goodwill that may have been there from his fans.

And, in an attempt to give a positive spin to this serious allegation, Spacey’s statement suddenly and jarringly transforms into his official coming out-announcement. Spacey, as he put it, has ‘chosen’ to now “live as a gay man.”

“I have a lot of respect and admiration for Anthony Rapp as an actor. I’m beyond horrified to hear his story. I honestly do not remember the encounter, it would have been over 30 years ago. But if I did behave as he describes, I owe him the sincerest apology for what would have been deeply inappropriate drunken behavior, and I am sorry for the feelings he describes having carried with him all these years.

This story has encouraged me to address other things about my life. I know that there are stories out there about me and that some have been fuelled by the fact that I have been so protective of my privacy. As those closest to me know, in my life I have had relationships with both men and women. I have loved and had romantic encounters with men throughout my life, and I choose now to live as a gay man. I want to deal with this honestly and openly and that starts with examining my own behavior.” – Kevin Spacey’s statement on Twitter.

By attaching such an announcement to this statement, Kevin Spacey has essentially — but perhaps unintentionally — dragged the LGBTQ community through the mud — he has thrown the community under the bus. It doesn’t take a genius to figure out how potentially catastrophic this can be for the LGBTQ community. As I am not a member of the LGBTQ community, I don’t feel comfortable speaking for it. But for more on that perspective, I’d point you in the direction of Vanity Fair columnist Richard Lawson’s twitter thread on the issue.

But the way he has tried to spin the allegation via this statement is somewhat Underwoodesque, which is to say that it reminds me of something his character Frank Underwood from House of Cards would do. It, honestly, reminds me of these two quotes:

“There’s no better way to overpower a trickle of doubt than with a flood of naked truth.”

“When you’re fresh meat, kill and throw them something fresher.”

I genuinely think that this allegation will ruin Spacey’s career and any project he is currently working on. Netflix seems to have already taken steps to alter the direction of his show House of Cards — one of the flagship shows on the streaming service.

But what we are seeing these days — with allegations of sexual harassment, assault, and the like — is the fact that victims are showing a lot of courage in speaking out against very powerful people like Kevin Spacey or Andy Signore, Harvey Weinstein, and Brett Ratner.

Of course, an allegation isn’t necessarily evidence, and we should keep that in mind whenever a new scandal rears its head. But these days it, certainly, does seem like victims are slowly, but surely, eliminating a toxic culture from Hollywood by revealing who these celebrities really are — people who’ve abused their positions of power.

UPDATE: More information about Kevin Spacey’s behavior is beginning to see the light. CNN is reporting that multiple people who’ve worked on Netflix’s House of Cards are alleging that Spacey sexually assaulted or harassed them while they were working on the streaming service’s flagship show.

UPDATE #2: Netflix has released a statement saying that the streaming service will not be involved with ‘any further production of House of Cards that includes Kevin Spacey.’ Spacey has essentially been suspended.

UPDATE #3: Director Ridley Scott and the producers behind Sony’s All the Money in the World, which is set to be released this year, have decided to cut Kevin Spacey out of the film and reshoot his scenes with Christopher Plummer.