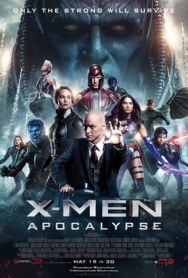 The following is a review of X-Men: Apocalypse, a Bryan Singer film.

I think X-Men: First Class is one of the most brilliant superhero-team movies ever made. The sequel, Days of Future Past, was a confident time-travel film, and I thought that film really worked well too. Indeed, since we’ve been met with the second wave of X-Men-films, starting with First Class in 2011, the franchise has been pretty spectacular. Sadly, X-Men: Apocalypse doesn’t work as well as the two X-Men-films that preceded it.

X-Men: Apocalypse takes place in the 1980s, ten years after Beast (played by Nicholas Hoult), Magneto (played by Michael Fassbender), and Mystique (played by Jennifer Lawrence) were revealed to the world. Mutants are real, and Xavier’s School is in place. Magneto, also known as Erik Lehnsherr, has abandoned the rest of the mutants, and now lives with a new family in Poland.

One day, Moira MacTaggert (played by Rose Byrne) finds out that En Sabah Nur (played by Oscar Isaac), the world’s first mutant, has awoken, and he is now trying to find his four horsemen to rule the world with. En Sabah Nur quickly seeks out Lehnsherr who, once again, has lost all faith in humanity, and now Xavier’s School for Gifted Youngsters must battle En Sabah Nur.

Michael Fassbender is one of the best actors out there, and the X-Men-franchise is lucky to have him. Magneto has been the most interesting character in the second wave of X-Men-films, and the character once again is the star of the film. Fassbender is outstanding as Lehnsherr, and he does a really good job with the heartache that mutants can go through. Fassbender features in one of the most heartbreaking and haunting scenes in the history of the X-Men-franchise, wherein Lehnsherr’s hatred and mistrust of the human species resurfaces. It is a tough scene to watch, and there are a lot of similar scenes in what is a surprisingly violent movie.

X-Men: Apocalypse reintroduces a lot of characters to us, and there are a lot of subplots. We get our first look at the new Jean Grey (played by Sophie Turner), the new Cyclops (played by Tye Sheridan), and the new Nightcrawler (played by Kodi Smit-McPhee). I really liked Sheridan and Smit-McPhee in the movie, but I’m still not sure how I feel about Sophie Turner’s Jean Grey. I really like the actress, but I need to think about her performance a little bit more before giving a fair and conclusive verdict.

For what it’s worth, I loved most of what I saw during the first half of X-Men: Apocalypse. I thought the early scenes with Fassbender’s character were spellbinding, and I loved seeing Xavier’s School actually function for once. But after the film added to the long list of subplots by reintroducing Stryker and Weapon X, then the film started to lose me a little bit, and the final fight just really didn’t work for me.

Much has been said about the look of En Sabah Nur, but that really didn’t annoy me at all. Sure, I would have loved to see Oscar Isaac not hidden behind makeup, but he looked just fine to me. And his character is really scary for a bit, until he isn’t. He is unapologetically evil, and that’s pretty much it. En Sabah Nur won’t become a fan favorite superhero movie villain.

From the trailers, we already knew that Archangel, Psylocke, Storm, and Magneto would be the four horsemen of the apocalypse, but I didn’t truly get why Storm and Archangel wanted to fight for En Sabah Nur. And, frankly, I thought Psylocke was used terribly. Also, En Sabah Nur wanted to really enhance the powers of his horsemen, but all but one of the four enhancement scenes were just stylistic makeovers.

Quicksilver was one of the very best things about Days of Future Past, and he is very fun in X-Men: Apocalypse as well. He is a part of the final fight, but it is a scene right in the middle of the film that you will be talking about when you return from the theater. Now at Xavier’s School, Quicksilver once again has a great standout scene. I’m not sure it is better than the scene from Days of Future Past, but it is much more fun than that one.

X-Men: Apocalypse is a very ambitious movie. The film has one of the most chilling and haunting scenes in the history of the franchise, but the final fight in the movie didn’t work for me. Some types of battles just work better in comic books. X-Men: Apocalypse isn’t bad, but it could’ve been, and maybe should’ve been, much more than what it is. You can have a great time with this movie, and I did love a huge chunk of it, but it didn’t live up to its potential.