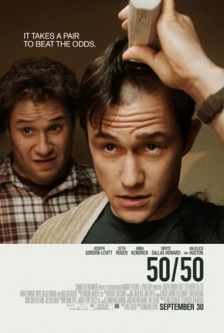 The following is a review of 50/50, a Jonathan Levine film.

When I first encountered 50/50 I had heard very little about it. I knew the premise, I was very familiar with the stellar cast, but I could have never expected how much I would love this film. It is one of the most perfect ‘dramedies’ (comedy-drama) out there. It is well-directed, well-acted, and unforgettable. 50/50 is a dramedy masterpiece.

50/50, which is based on writer Will Reiser’s own experience with cancer, follows Adam Lerner (played by Joseph Gordon-Levitt), a public radio journalist who never steps out of line; Adam’s friend and co-worker Kyle Hirons (played by Seth Rogen); Adam’s girlfriend Rachael (played by Bryce Dallas Howard); and Adam’s soon-to-be therapist Katherine (played by Anna Kendrick).

When Adam starts to notice a pain in his lower back, he goes to the doctor to get a diagnosis, but is shocked to find out that he has a malignant tumor in his spine, and that his chances of survival are fifty-fifty. Adam now has to deal with an overbearing mother, an inexperienced therapist, his uncomfortable girlfriend, and his best friend who seems to use Adam’s disease for his own good.

This is a really special movie, and it handles its topic matter really well. It eases you into the movie and the ‘dramedy’ genre with a lot of humor, but finds these few moments to truly crush you with sudden spikes of emotion. In no way can you call this film overdramatic, and it does treat the topic matter with a lot of respect.

Both Seth Rogen and Anna Kendrick are really delivering solid performances, but Joseph Gordon-Levitt is the ultimate star of the film. He has flawless chemistry with both Rogen and Kendrick. When his character breaks down or has a panic attack he is just perfect. It is one of, if not, the best performance of his career.

Even the little things in this film work. The soundtrack is solid, and the small parts that Matt Frewer and Philip Baker Hall play are also really well done. 50/50 is a perfectly harmonious blend of comedy and dramatic emotion. It is so much more than just a ‘cancer comedy’.